Sokoman and Benton Provide an Update on Drilling at the Kraken Lithium and Grey River Gold projects, Southwest Newfoundland

The Company has completed approximately 70% of a three-phase metallurgical test program aimed at validating and optimizing the flowsheet parameters outlined in the PEA and to support continued development of the Project. Phase 2 of the program had the following key objectives:

Figure 1 shows the Baptiste nickel recovery flowsheet as presented in the PEA. Highlighted within this figure are the unit operations which are the focus of each respective testwork phase.

Phase 2 of the metallurgical testwork campaign was overseen by Jeffrey B. Austin , P.Eng., President of International Metallurgical and Environmental Inc. Table 1 presents a summary of the Phase 2 testwork program, including general scope assignment by laboratory.

The objective of the mineralogy variability testwork was to improve the understanding of nickel speciation at Baptiste and to provide insight into the relationship between awaruite grain size and DTR nickel. Detailed mineralogy was conducted on six mine phase composites samples representing the 35-year mine life envisioned in the PEA, as well as other composites from key historical testwork campaigns.

A key outcome of the testwork was finding that nickel mineralization at Baptiste is present only as awaruite (Ni 3 Fe) or nickel sulphide minerals. This supersedes a historic understanding that indicated approximately 10% of nickel was present as solid solution within silicates. The more detailed mineralogical work involved more exhaustive scanning microprobe analysis using QEMSCAN tools and longer scanning durations, confirming that previously reported solid solution nickel is actually very fine awaruite contained within a silicate matrix.

The mineralogical analysis indicated that awaruite accounts for 85-92% of total nickel content across the six mine phase composite samples. The balance of the nickel mineralization (8-15%) occurs as nickel sulphide minerals, most notably heazlewoodite and pentlandite. This confirms that awaruite is the dominant nickel mineralization across the Baptiste deposit, and that this mineral occurrence is relatively homogenous across all mine phases. The high content of awaruite, and the processing advantages associated with this style of mineralization, is the result of the virtual lack of sulphur in the host rock at the time of alteration.

Assay analysis of the composites indicated a range of 0.20-0.25% total nickel, with 50-70% of the total nickel reporting as DTR nickel. Comparing these assay results with the mineralogical results indicated the difference between DTR nickel (50-70% of total nickel) and awaruite speciation (85-92% of total nickel) correlates strongly with the percentage of very fine awaruite (less than 5 microns).  This result was expected as the DTR test is essentially a metallurgical test to identify the proportion of awaruite of sufficient grain-size to be collected by magnetic separation.

The strong correlation between DTR nickel and awaruite grain size is shown in Figure 2. It is noteworthy that the PEA’s starter pit (“PEA Testwork” and “Mine Phase 1AB” datapoints) has the lowest proportion of fine awaruite within the resource, which aligns with the higher DTR nickel grades during the early years of operation. This provides confidence in the selection of the Baptiste starter pit location, which provides increased nickel production in the early years of operation due to the generally coarser, more readily recoverable awaruite. 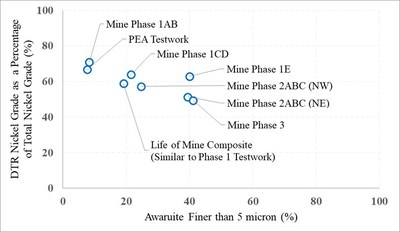 In addition to improving the understanding of the Baptiste mineralogy, these results also demonstrate the value of using the DTR assay method as a geometallurgical tool. Very fine awaruite and nickel sulphides are not captured in the DTR test, nor are they currently targeted for recovery in the PEA flowsheet (though both represent future recovery opportunities). This finding helps validate that the DTR nickel grade filters a significant portion of metallurgical variability from the Baptiste resource. As such, projected metallurgical recoveries on a DTR nickel basis will be significantly less variable than recoveries on a total nickel basis, thereby increasing the confidence in the basis of the Baptiste resource and the associated recovery projections.

As reported in the summary of the Phase 1 metallurgy testwork campaign (see the Company’s December 8, 2021 news release), magnetic concentrate (principally containing awaruite and magnetite) was produced from pilot testing material approximately representative of the Baptiste resource. This pilot plant utilized closed circuit grinding with cyclone classification which, as planned, resulted in preferential grinding of the dense awaruite particles. While this preferential grinding tangibly lowered magnetic separation tailings grades, it also resulted in the significant hold-up of awaruite within the grinding circuit, resulting in a lower-than-expected flotation feed grade (2.2% observed versus 2.6-2.7% expected).

Batch and locked-cycle flotation testwork has demonstrated the ability to produce high-grade flotation concentrates, routinely exceeding 60% nickel, with select tests achieving grades of up to 68% nickel, despite the lower flotation feed grade. These high-grade concentrates are possible due to high nickel tenor in awaruite (Ni 3 Fe).

While recovery values are less than the PEA flotation stage recovery criteria of 94%, the current SGS flotation results were impacted by the lower feed grade owing to the hold-up of nickel in the pilot plant grinding circuit. As comparable flotation tailings grades were observed across the current and historic flotation programs, and previous testwork indicated that coarse, liberated awaruite is readily recoverable in flotation, it is anticipated recovery estimates would increase if the flotation feed material was more representative.

Given the results described above, the scope and duration of Phase 2 testwork has been extended to pursue opportunities to further improve the flotation regime and overall results; results of this expanded portion of the Phase 2 testwork program are anticipated in the fourth quarter of 2022.

Building on the results of Phase 1 piloting, Phase 3 of the metallurgical testwork campaign includes larger-scale pilot processing, with the intent to both optimize the PEA flowsheet and to produce a significant quantity of high-grade awaruite concentrate for hydrometallurgical testwork. The pilot testwork is being conducted at Corem in Quebec City . Progress to date includes bench- and pilot-scale testing of the primary grind/magnetic separation and regrind/magnetic separation unit operations. Key initial findings of Phase 3 pilot testing are presented below, and the full results are expected to be released in the fourth quarter of 2022.

As noted above and previously released by the Company, the initial pilot-scale testing in Phase 1 indicated potential DTR nickel recoveries up to 5% higher than those observed in previous bench-scale testing, owing to the preferential grinding of the deposit’s dense awaruite nickel mineralization using cyclone classification. However, due to the feed rate and duration of this Phase 1 initial piloting, substantial hold-up of nickel (estimated 20-40%) was witnessed within the grinding circuit. As such, this led the Company to undertake larger-scale piloting, utilizing higher feed rates and longer operating duration in order to reach steady state operation.

The Phase 3 primary grind and magnetic separation campaign processed a total of 16 tonnes of feed material over a cumulative duration of 80 hours (as compared to Phase 1 piloting which processed 3.6 tonnes over a cumulative duration of 23 hours).  Similar to Phase 1 piloting, Phase 3 piloting saw significant hold-up of dense awaruite, and it took an estimated 11 tonnes of material over a cumulative period of 54 hours to reach steady state operation, indicated by equivalent DTR nickel grades in the fresh mill feed and the cyclone overflow.

At steady state, the DTR nickel recirculating load was approximately 700%, compared to the overall mill recirculating load of 300%.  Once steady-state conditions were reached, a clear preferential grinding benefit of dense awaruite particles in closed circuit grinding was observed with a 5% DTR nickel recovery increase relative to open circuit grinding on the same sample. Consistent with the results of the Phase 1 program, these new results continue to indicate the potential to achieve nickel recoveries up to 5% higher than the 90% DTR nickel primary magnetic separation stage recovery assumed in the 2020 PEA.  Better liberation seen in the pilot plant work, due to cyclone classification, is also contributing to a reduction in the mass recovery during magnetic separation at comparable or better nickel recoveries.

As a further optimization opportunity, additional pilot plant trials with modestly increased magnetic separation field strength demonstrated that a further 1-4% nickel recovery could be realized with a relatively low increase in mass recovery. Further testing and evaluation of varying magnetic intensities is planned during the remainder of the Phase 3 program. Complete results will be presented when the pilot campaign is complete.

In addition to the results described above, remaining aspects of the Phase 3 testwork program include the following:

The metallurgical information in this news release has been prepared in accordance with Canadian regulatory requirements set out in National Instrument 43-101 Standards of Disclosures for Minerals Projects of the Canadian Securities Administrators (“NI 43-101”) and supervised, reviewed, and verified by Jeffrey B. Austin , P.Eng., President of International Metallurgical and Environmental Inc., a “Qualified Person” as defined by NI 43-101 and the person who oversees metallurgical developments for FPX Nickel.

About the Decar Nickel District

Decar hosts a greenfield discovery of nickel mineralization in the form of a naturally occurring nickel-iron alloy called awaruite (Ni 3 Fe), which is amenable to bulk-tonnage, open-pit mining. Awaruite mineralization has been identified in four target areas within this ophiolite complex, being the Baptiste Deposit, and the B, Sid and Van targets, as confirmed by drilling, petrographic examination, electron probe analyses and outcrop sampling on all four targets.  Since 2010, approximately US $28 million has been spent on the exploration and development of Decar.

Of the four targets in the Decar Nickel District, the Baptiste Deposit, which was initially the most accessible and had the biggest known surface footprint, has been the focus of diamond drilling since 2010, with a total of 99 holes and 33,700 m of drilling completed. The Sid target was tested with two holes in 2010 and the B target had a single hole drilled in 2011; all three holes intersected nickel-iron alloy mineralization over wide intervals with DTR nickel grades comparable to the Baptiste Deposit. In 2021, the Company executed a maiden drilling program at Van, which has returned promising results comparable with the strongest results at Baptiste.

FPX Nickel Corp. is focused on the exploration and development of the Decar Nickel District, located in central British Columbia , and other occurrences of the same unique style of naturally occurring nickel-iron alloy mineralization known as awaruite. For more information, please view the Company’s website at www.fpxnickel.com or contact Martin Turenne , President and CEO, at (604) 681-8600 or ceo@fpxnickel.com .

On behalf of FPX Nickel Corp.

Certain of the statements made and information contained herein is considered “forward-looking information” within the meaning of applicable Canadian securities laws. These statements address future events and conditions and so involve inherent risks and uncertainties, as disclosed in the Company’s periodic filings with Canadian securities regulators. Actual results could differ from those currently projected. The Company does not assume the obligation to update any forward-looking statement.

Neither the TSX Venture Exchange nor its Regulation Services Provider accepts responsibility for the adequacy or accuracy of this release.