While the copper market has been affected by overall economic conditions, the metal is necessary for the long-term decarbonisation movement. The Australian government’s Office of the Chief Economist recently published its June quarterly resource and energy report and forecasts copper prices to average US$4.3/lb in 2022 before slightly falling back to US$4.08/lb by 2024, accredited to a growing surplus of the base metal. But, don’t call it quits on copper quite yet. The demand for copper will likely remain strong as it’s vital to clean energy technologies.

Latin America is a dominant player in global mining, leading in copper, silver and iron ore production. Codelco, the major Chilean mining company, is the largest copper producer worldwide. Additionally, significant partnerships with automotive manufacturers, such as Ford, create even greater interest in the region. Major players in Brazil’s mining landscape include Ero Copper (TSX:ERO), a high margin, high growth green copper producer with fully funded operations in Para, Mato Grosso and Bahia. Also notable is Nexa Resources (NYSE:NEXA) which is currently ramping up activities at its Aripuanã world-class polymetallic mine in Mato Grosso, Brazil. Yet, there is still untapped potential throughout the country, creating more opportunities for exploration and development.

Alvo Minerals (ASX:ALV) is an exploration and development company focused on a district-scale opportunity in an underexplored asset in Palmeiropolis region of central Brazil. The advanced-stage Palma project has produced exploration results that indicate high-grade copper-zinc deposits in a rich volcanogenic massive sulphide (VMS) zone. The project is surrounded by active mines, including Lundin Mining’s Chapada copper-gold mine and Serra Verde’s REE project.

The Palma project was discovered in the 1970s, yet it has been idle for approximately 30 years. Once Alvo Minerals acquired the project, it became the first mining company to apply modern, systematic, and aggressive exploration techniques. A 2012 JORC inferred mineral resource estimate indicated 4.6 million tonnes at 1.0 percent copper, 3.9 percent zinc, 0.4 percent lead and 20 g/t silver. The company also recently released assays on the C3 deposit- with highlights including 7.0m @ 5.2 percent Cu, 8.0 percent Zn & 7.4m @ 2.2 percent Cu, and 23.1 percent Zn.

Only the outcropping prospects in the Palma project have been drilled to date, leaving much of the VMS prospects unexplored. The company owns 80 percent of the district, which facilitates future exploration campaigns to discover additional deposits. In addition, the project has a robust local infrastructure alongside strong political and community support.

The district-scale project has identified two prospects with distinct characteristics: C3 and C1. The C3 prospect has completed phase 1 drilling, and assays indicate high-grade copper and zinc. The C1 prospect is presently undergoing diamond drilling, and phase one intercepted significant polymetallic sulphides with higher quantities of high-grade zinc and lead than C3. Other prospects have yet to be drilled but have been identified by drillhole electromagnetic (DHEM), fixed loop electromagnetic (FLEM), versatile time domain electromagnetics (VTEM) and induced polarized (IP) surveys.

Alvo MInerals is lead by a management team with robust exploration and mining experience in Brazil and around the world. Graeme Slattery, Alvo’s Non-Executive Chairman, has extensive experience dealing with foreign jurisdictions and regulatory issues. Managing Director Rob Smakman is a geologist with over 25 years of international experience highlighted by having successfully founded and listed Crusader Resources and initiated the company’s Brazilian entry and operations. 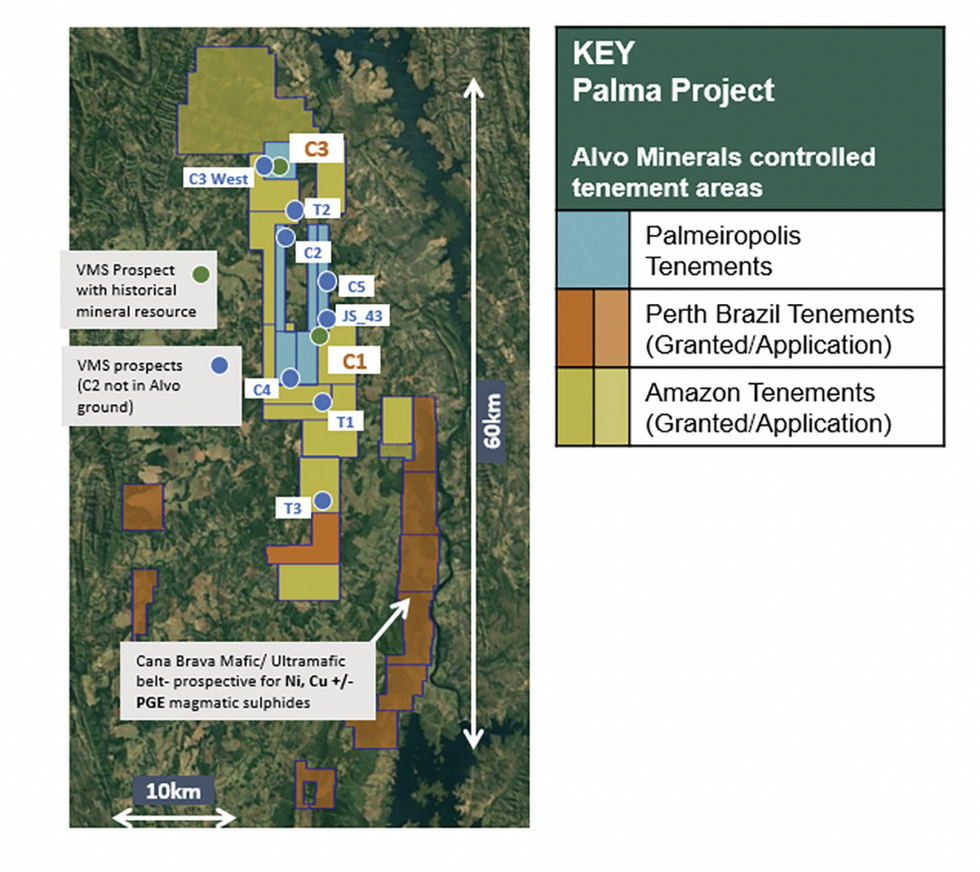 Alvo Minerals’ district-scale project contains an identified VMS formation, which contains clustered deposits of important minerals. Only two prospects have received exploratory drilling, while VTEM/FLEM and IP surveys have identified several others for future campaigns. A strong infrastructure and community support further emphasise the potential of the Palma project to become a significant producer in the region.

Graeme Slattery is a practising corporate lawyer with over 20 years of experience advising companies in the mining and resources sector on all aspects of corporate and commercial law. He has extensive experience dealing with foreign jurisdictions and regulatory issues and serves on numerous international boards.

Rob Smakman is a Geologist with over 25 years of international experience, over 10 of which were in Brazil. Fluent in Portuguese, he successfully founded and listed Crusader Resources and was responsible for instigating its Brazilian entry and operations. Smakman sourced, negotiated, explored and built projects in Brazil and around the world and has raised >USD100M in capital (equity and debt) for multiple projects.

Beau Nicholls is a Geologist with over 25 years of international experience, including 9 years in Brazil as the Principal consultant for Coffey Mining- a leading international consulting firm (Beau is fluent in Portuguese). Nicholls is an Executive Director with ASX-listed Big River Gold and Principal Consultant for Sahara Natural Resources, specialising in exploration and mining services in Africa.

DRC: the Government and the GEMCORP Group plan to set up a financing facility of USD 500 million for the benefit of oil companies

Oil and gas blocks: Kinshasa and Washington decide to set up a task force on climate change