Inflationary pressure has affected most markets, and gold was not immune from its effects. Despite gold prices stabilizing from a 19-month high in March 2022, analysts expect gold’s global supply and demand to remain robust through 2026. Richard Kiyosaki, famed author of “Rich Dad, Poor Dad,” projects gold to reach upwards of US$5,000 over the next five years.

On the supply side, mining jurisdictions play a vital role in the success or failure of a mining project. A mining-friendly jurisdiction with a government and community that supports the industry creates a stable environment for projects to reach their full potential. Conversely, unfriendly jurisdictions can create endless hurdles and challenges, leaving impressive projects unable to reach full development. Nevada has once again earned a top spot on The Fraser Institute’s list of the top mining jurisdictions in the world. Nevada ranked in the top 10 on both of Fraser’s important lists: Investment Attractiveness and Policy Perception.

The company is led by an experienced team focused on unraveling the geological setting of the mineralization on each project through careful geological mapping, and the application of modern geophysical and geochemical techniques in order to increase the understanding and potential of each asset. Many of the Nevada targets were poorly understood due to their atypical geology, underexplored in terms of modern exploration techniques, and were mined for different commodities other than copper-gold-silver. All of these factors suggest the properties have not been tested for their true potential, and significant blue-sky opportunities for increased value are present.

The company fully owns two promising assets in Nevada: the Scossa Project (Gold) and the Kinkaid Project (Gold-Copper-Silver). Romios has recently re-focused its efforts on these core assets while still continuing exploration in British Columbia and Ontario, and opening discussions with potential investment partners for these large-scale exploration assets.

An experienced management team leads the company with a scientific approach to mineral exploration and a dedication to open engagement with First Nations and Indigenous communities. Stephen Burega, CEO and President, has significant experience managing natural resources projects, negotiating joint ventures and fundraising. John Biczok, Vice-President Exploration, is a professional geologist with over 40 years in the mineral resources industry. A longstanding and experienced board of directors brings additional experience in geology, property acquisition, business administration and international law. 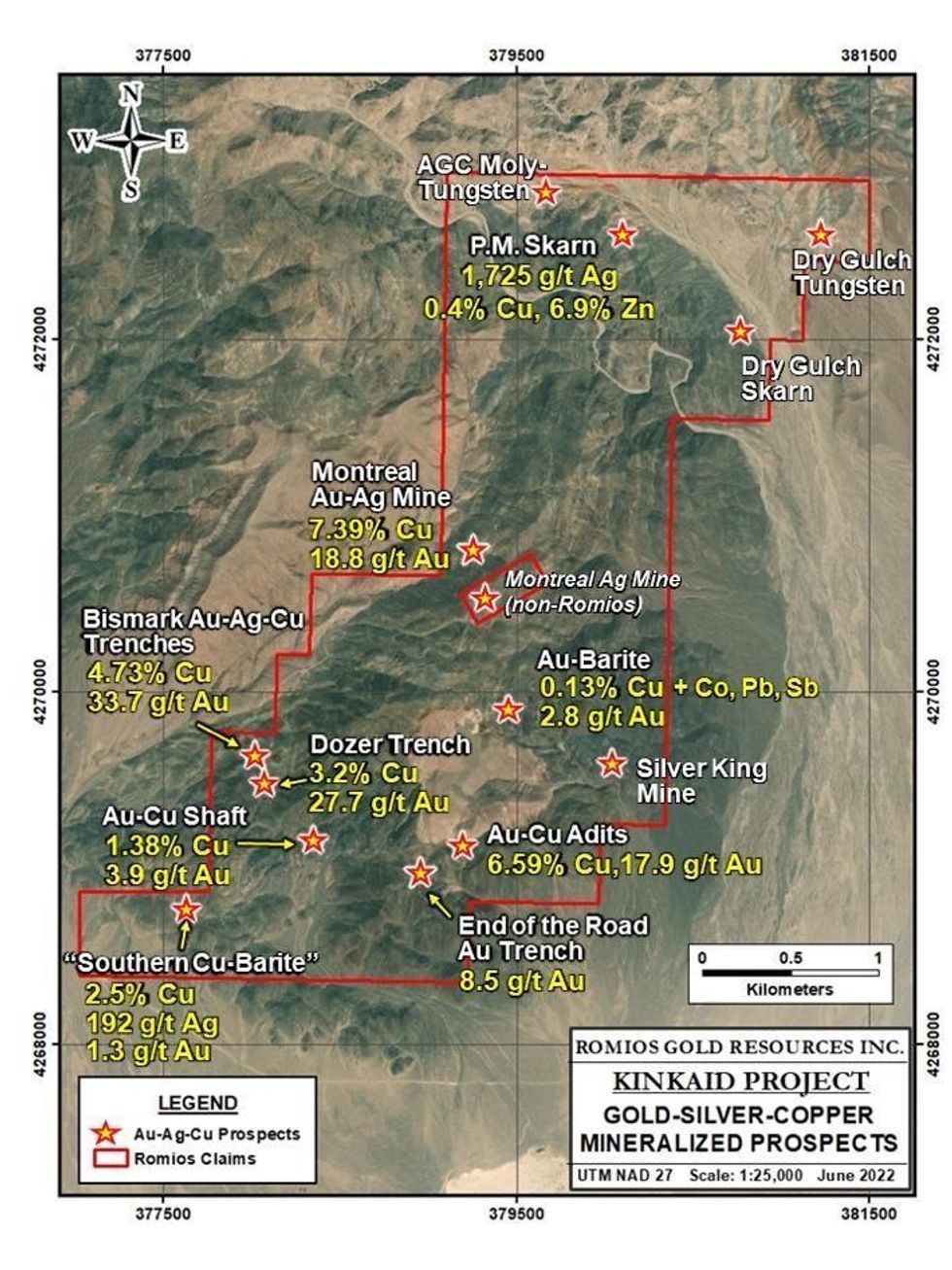 The Kinkaid Project is located in Mineral County within the Walker Lane Trend and is 18 kilometers east of Hawthorne, Nevada. The claim block is made up of 109 claims covering 2,252 acres, with numerous historic mine workings and prospects across the property, including:

Romios Gold Resources is currently undertaking a detailed geological mapping and sampling program across the Kinkaid property, as well as a drone magnetic survey of the northern claims, with diamond drilling of several showings anticipated in 2023.

Romios Gold President and CEO Stephen Burega shared, “We are very excited by these high-grade gold, copper and silver assays and the local abundance of bismuth, antimony and mercury in the numerous gold bearing veins recently identified on the southern claims of the Kinkaid property.” 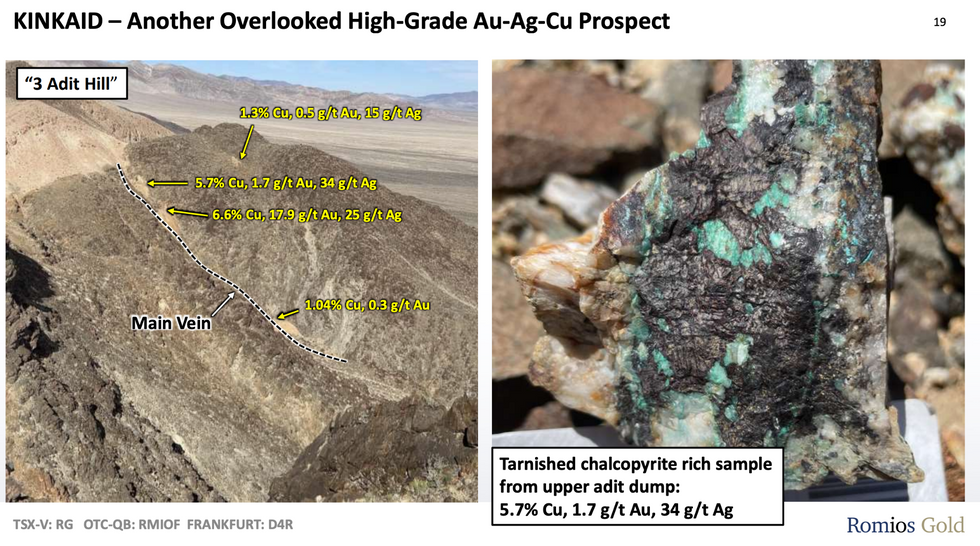 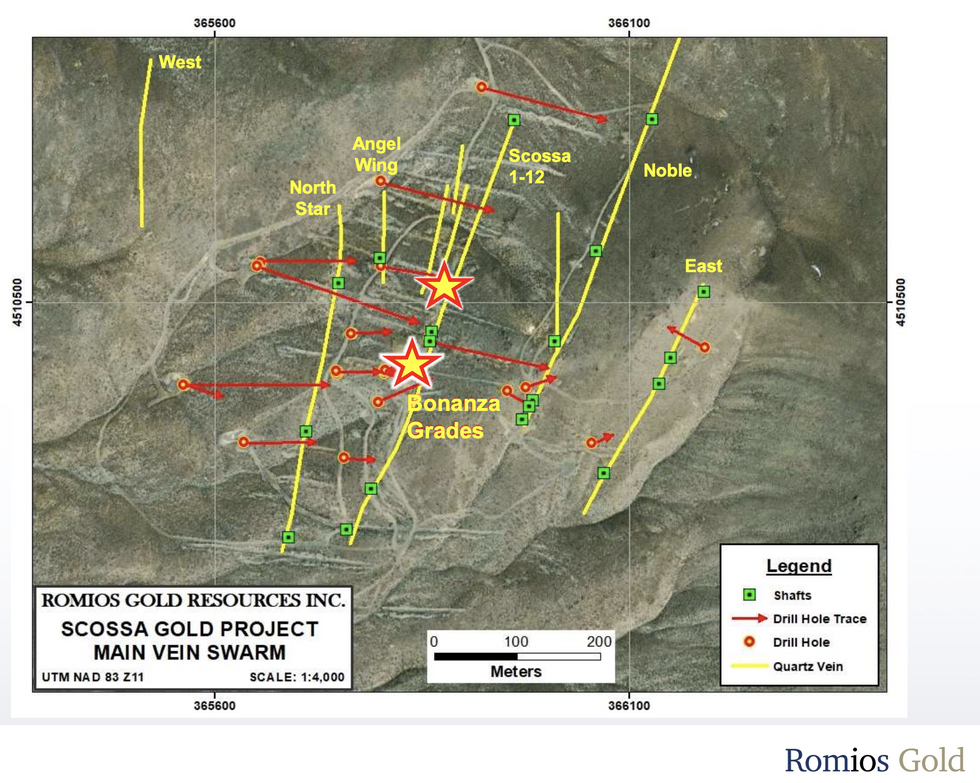 The Scossa Gold Project is located in Pershing County, Nevada, at the intersection of the prolific Sleeper & Rye Patch Trends, and covers a former-producing, high-grade gold mine that was in production from 1930 to 1941. The project is eight miles southeast of the Hycroft Gold Mine, which has an estimated gold resource of 9.65 million ounces measured and indicated.

Scossa was an underground mine during the 1930s before it was shut down during WWII. It was explored to a limited degree historically but has yet to be explored using modern, leading-edge technologies or ore deposit models that are critical to successful exploration of deposits like this. Past production was from five epithermal veins in faults up to 6 ft. wide with an average grade of over 1 oz/t gold. Some ore was so rich it was stored in the bank vault in Lovelock. Historic production was limited to the upper 400 ft. while the geology of similar deposits nearby suggests there should be 1,000 ft. of potential ore left beneath old workings. Some additional veins that were never tested by drilling are now known.

Romios Gold Resources completed a series of drill campaigns in the early 2000s with some spectacular results, including diamond drill holes which returned assays up to:

Follow-up mapping and sampling in 2021 returned assays ranging from trace to 23 g/t gold and 84 g/t silver. The assay results and observed vein textures suggest there is potential for at least 1,500 feet vertically of mineralization above the base of Scossa hill, where the paleo-boiling zone is exposed, in addition to the unknown vertical extent of the boiling zone at depth. 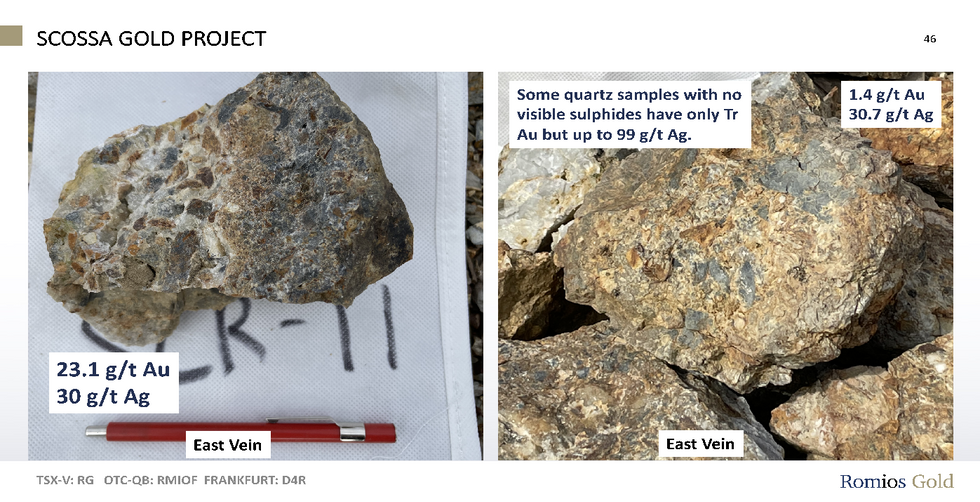 According to VP for Exploration John Biczok, “Epithermal gold-silver veins like those at the Scossa property typically form when hydrothermal ore fluids under pressure begin to boil as they rise to an elevation shallow enough to overcome the hydrostatic pressure.” He further explained, “Changes in the fluid due to boiling cause the gold and silver to precipitate and it can then be carried upwards in finger-like shoots at various intervals along the veins. These shoots can be very high-grade and it is important to determine where the mineralized shoots are versus the low-grade background vein material.” 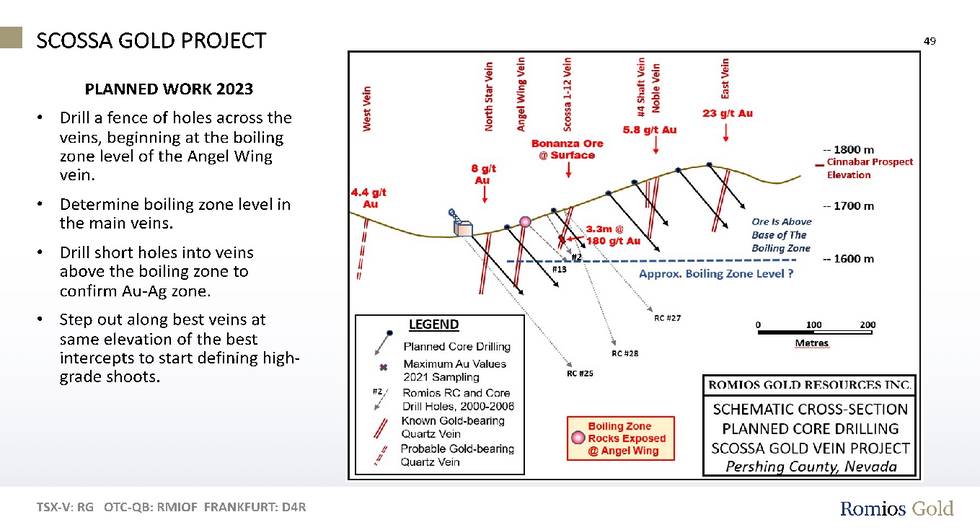 Romios Gold Resources’ Nevada projects are its flagship assets, but the company is also simultaneously carrying out exploration campaigns on its Canadian projects. These projects are located in British Columbia and Ontario. 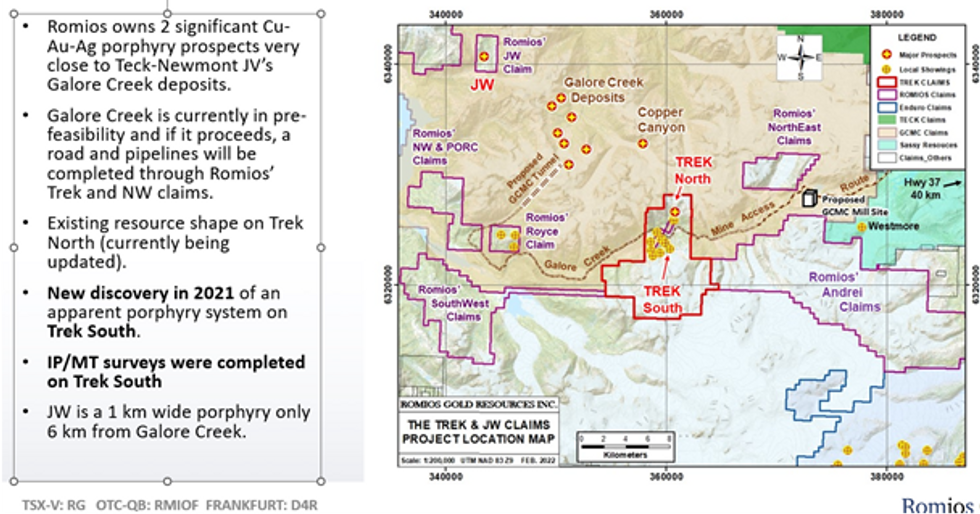 Stephen Burega has been in management and operations in the mining and natural resources sectors for the past 13 years and also has extensive experience in corporate development and fundraising, joint venture due diligence and negotiations, and management of public markets. His deep emerging markets background, along with a strong understanding of stakeholder management, social development, and structured community engagement and programming positions him well to lead Romios’ First Nations community engagements. His eight years of corporate communications and media relations, coupled with extensive issues management experience, are additional assets to be leveraged as Romios builds towards the future.

John Biczok, P. Geo., is a professional exploration geologist with over 40 years of experience in a wide range of ore deposit types, including many that are relevant to Romios’ various mineral properties such as copper-gold skarns, massive sulphides, shear-hosted gold, iron formation-hosted gold and various exhalative type deposits (lead-zinc, barite). Biczok began work with Romios in August 2016 as a consultant in charge of the Lundmark-Akow Lake drill program in northwestern Ontario. His interpretation of the geology in those drill holes led to a new genetic model for the copper-gold mineralization and the subsequent discoveries of the first base metal massive sulphide and high-grade gold zones in the area. Before joining Romios, he worked at Goldcorp’s (now Newmont) Musselwhite gold mine (18 km south of the Lundmark-Akow Lake property) for 12 years, most recently as senior exploration geologist and senior research geologist. Prior to this, he led Phelps Dodge Exploration’s copper, gold and lead-zinc exploration efforts in India from 1999 to 2002, and worked for a number of mining companies in western Canada, including Mattagami Lake Exploration, Noranda Exploration and Manitoba Mineral Resources managing exploration programs for base metals, gold and nickel. Among his achievements with these companies was the discovery of a new ore zone at Musselwhite, initiation of the work that led to the discovery of the past-producing Brewery Creek gold deposit in Yukon, and leading the team that discovered the Monument Bay gold deposit in northern Manitoba.

Frank van de Water holds a B.Comm. from Concordia University, Montreal, and is a member of the Canadian Institute of Chartered Professional Accountants. He has had a 40-year career in financial roles with a variety of companies including a multinational mining, metal processing and metal trading company, and extensive experience with mining companies operating in Canada, Africa and Europe, all listed on the TSX, TSXV or LSE. He has held the positions of controller, VP finance, CFO and president at various times, and was the finance director of a large metal dealer on the London Metal Exchange. Van de Water is also a director at five other public companies.

Teck and Ocean Regenerative Collaborate to Use Seaweed to Grow Trees