Gold is a well-respected hedge against inflation and global economic uncertainty. The spot price of gold recently hit a 19-month high in March 2022 of US$2,058 per ounce and has since dipped to ~US$1,700. This fluctuation has prompted market analysts to say that “gold is absolutely on sale right now,” as the current USD index is impacting its spot price.

There are several ways to invest in gold, including commodities and shares in mining companies. When investing in a mining company, it’s essential to consider the location of their projects. Stable jurisdiction with mining-friendly regulations is ideal. Fraser Institute’s 2021 Annual Survey of Mining Companies named Ontario the 12th most attractive jurisdiction for investment attractiveness and 13th for mineral potential. Additionally, Ontario is the largest producer in Canada of gold, PGEs and nickel. These data offer a level of confidence in Ontario-based mining operations.

The Traxxin gold project, west of Thunder Bay, has hosted numerous high-grade gold intersections in drilling. The most recent of which intersected 3.6 g/t gold over 12.3 meters. The project is a joint venture between Bold Ventures, as the operator, and Lac des Milles First Nation, where the joint venture can earn up to 100 percent of the property. The company’s additional assets include projects known for gold and for base metals needed for the growing clean energy market.

An experienced team of explorers and project managers leads the company toward fully realizing the potential of its portfolio. The company’s leadership team has participated in three significant world-class discoveries, including:

The Bold Ventures teams’ wealth of experience allows them to acquire undervalued assets and apply sophisticated exploration techniques to identify significant mineral deposits. Leadership continues to explore its existing assets as it moves toward development. 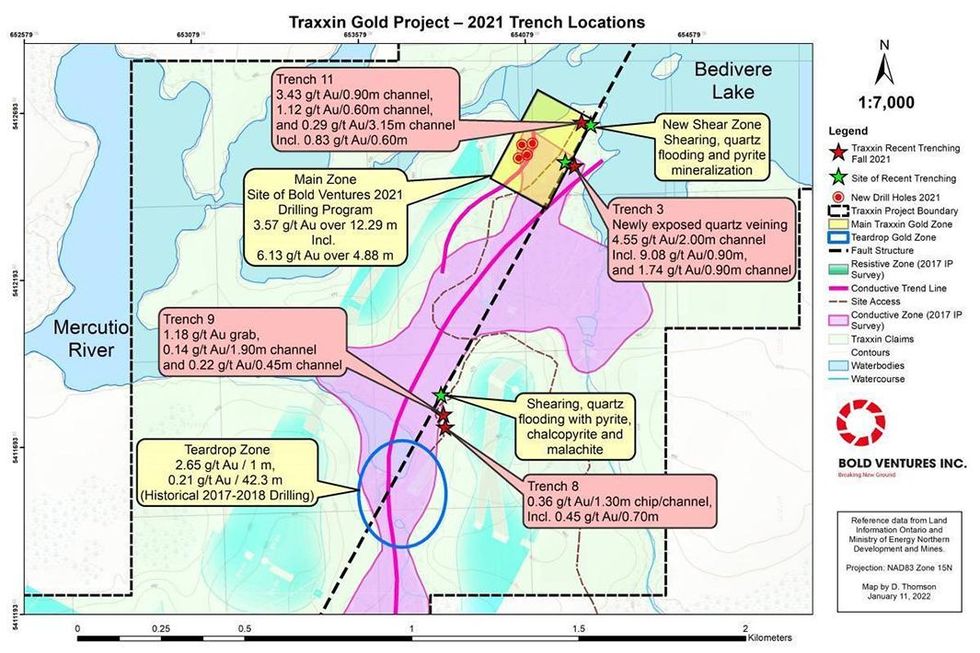 The Traxxin gold project is 130 kilometers west of Thunder Bay and has 154 claims covering 2,417 hectares. The project has excellent existing infrastructure and is road-accessible, cutting down on future development costs. 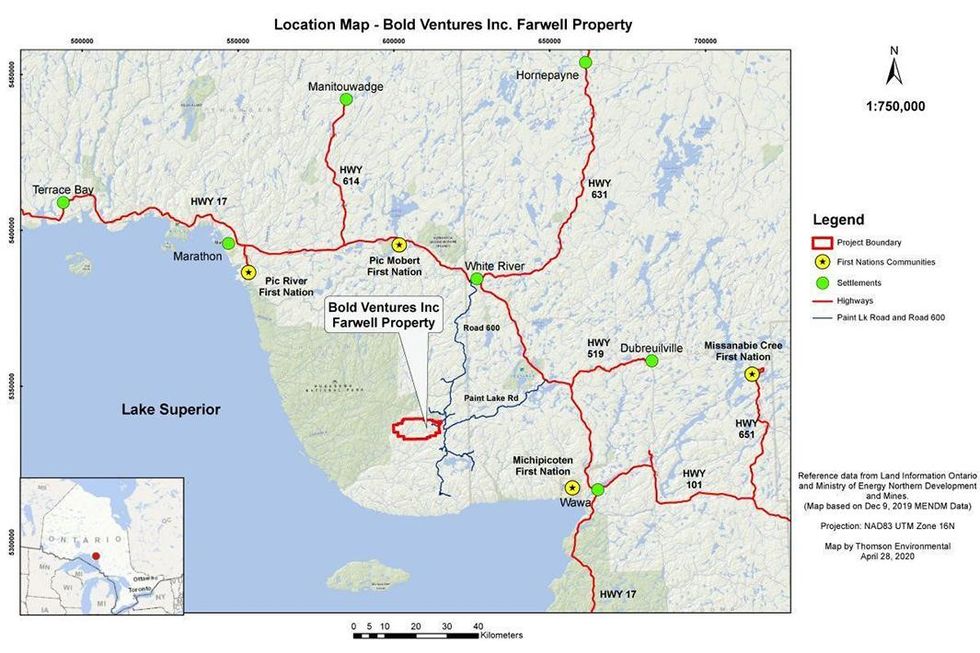 The Farwell project covers 19,200 acres of 113 cells, 18 multi-cells and six boundary claims. The asset is located in the east Lake Superior region of Northeastern Ontario, approximately 55 kilometers northwest of Wawa, and in a proven gold camp. 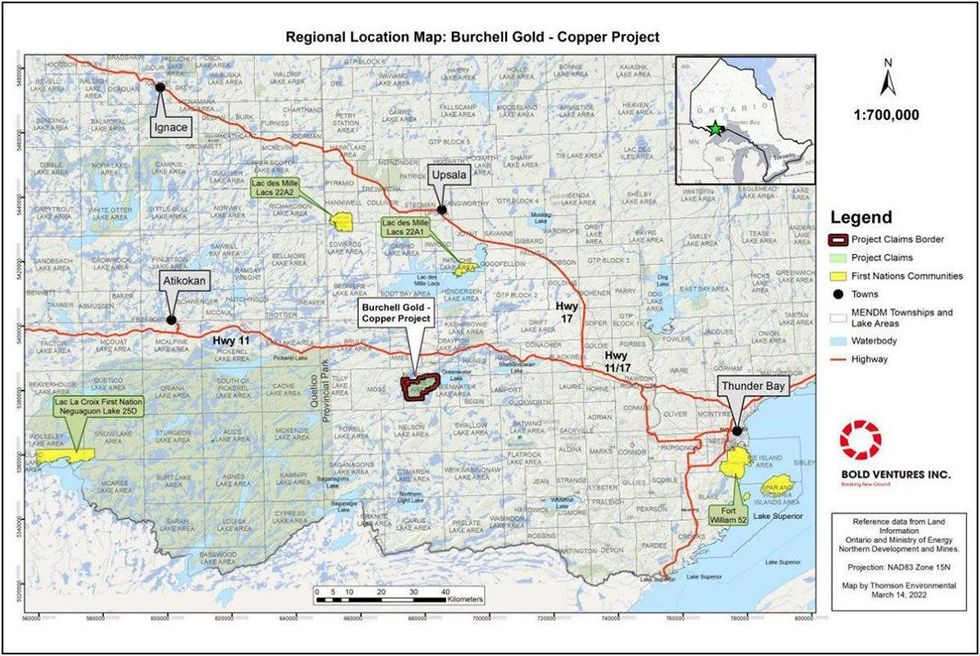 The Burchell asset includes 188 cells covering 4,512 hectares and is located 105 kilometers west of the port city of Thunder Bay in the south-central portion of Northwestern Ontario. The project is road-accessible through Trans-Canada Highway 11.

The Wilcorp gold asset covers 266 hectares and consists of two contiguous properties in the McCaul township, including four patent claims and one mineral claim. The asset is 14 kilometers east of the town of Atikokan, Ontario, and within the Thunder Bay Mining Division. New drill targets have been identified for follow-up exploration.

The Ring of Fire asset is a future key project that will be given further attention as the Ring of Fire regional infrastructure and First Nation agreements are developed.

David Graham has been active in the mineral exploration industry for over 40 years. Between 1997 and 2004 he was co-founder, president and CEO of Normiska Corporation, an industrial minerals and materials company with four production facilities in Canada and the United States. Between 2006 and 2010 he was a director and vice-president of Noront Resources Ltd. During this time the company made major discoveries at Windfall Lake in Urban Twp., Quebec and the Ring of Fire in the James Bay Lowlands of Ontario. From 2010 until 2017 he was executive vice-president of Bold Ventures Inc. at which time, he was appointed president and CEO. Since 1986, Graham has been president of R. Bruce Graham and Associates Ltd., a mineral exploration and natural resource consulting firm founded in 1956.

Graham has worked extensively in Canada as well as in the United States, Scandinavia and Africa. His experience has frequently included working with First Nations and regulatory agencies on projects that ranged from a grassroots stage to advanced development.

Robert Suttie has more than 25 years of experience, 10 of which were in public accounting prior to his tenure with the financial reporting group, Marrelli Support Services Inc., where he currently serves as president. Suttie specializes in management advisory services, accounting and the financial disclosure needs of the group’s publicly traded client base. He is regularly involved in initial public offerings, business combinations and asset carve-out and spin-out transactions. Suttie also serves as chief financial officer to a number of junior mining companies listed on the TSX, TSX Venture exchanges, CSE, as well as non-listed companies. Suttie leverages his skills and experience to become integral to the reporting issuers.

Ian Brodie-Brown is an industry consultant and entrepreneur. Brodi-Brown is a graduate of the University of Toronto and has many years of experience arranging venture capital for emerging companies, specializing in the mining industry. Brodie-Brown is the past president and chief executive officer of AurCrest Gold Inc., a TSX Venture listed junior resource exploration company. Brodie-Brown is also a co-founder and president of Cathay Oil & Gas, a private company with foreign resource assets. He has a strong understanding of Aboriginal issues surrounding today’s mineral industry in Canada, and has successfully negotiated MOUs and exploration agreements with First Nation groups.

Steve Brunelle is a graduate in geology from Queen’s University with over 35 years’ experience in the resource industry. He is the chairman and a director of Rio Silver Inc. listed on the TSX Ventures Exchange. Brunelle was a founder and officer/director of Corner Bay Silver, which discovered the Alamo Dorado Silver deposit in Mexico and was acquired by Pan American Silver. He was a founder and officer/director of Stingray Copper, which was acquired by Mercator Minerals for the El Pilar Copper deposit in Mexico. He presently sits on the board of several resource companies that are active in Canada and Peru.

Jeff Wareham has over 30 years in the financial services industry. He is a former vice-president of two major Canadian brokerage firms. In this role, he was actively involved in the IPO of the 2012 TSX Venture stock of the year, and the IPO of the largest revenue stock on the TSX-V. He was directly involved in raising over $200 million for Canadian companies. He is currently CEO of Catch Capital Partners Inc., a private equity firm. He is a past director of Marquest Asset Management, an investment fund company focused on Canadian resource investments. He is also a director of Certive Solutions, a publicly listed US healthcare revenue cycle company. He hosted a weekly radio show for several years, and conducted many small cap investment interviews. Wareham graduated from Western University in 1990, with a degree in economics and English. He has earned several financial industry designations. He has been a professor of economics and a guest speaker on economics and political science at Canadian post-secondary institutions.

CONGOLESE TOWN TO ‘DISAPPEAR’ TO GIVE WAY FOR COBALT MINES

European Lithium set for US listing via merger with SPAC Sizzle