Countries across the world continue to commit to a more sustainable future. The interest in electric vehicles (EVs) continues to grow in tandem with the worldwide drive to reduce carbon emissions. Critical minerals drive the electrification revolution, with nickel being one of the hidden heroes in the lithium-ion battery industry.

Blackstone Minerals (ASX:BSX,OTC:BLSTF) is an Australian company focused on sustainability in the international battery industry. Its flagship Ta Khoa Nickel Copper PGE Project is located in the Son La Province of Vietnam. It includes the existing Ban Phuc mine, which was successfully operated by Asian Mineral Resources from 2013 to 2016. This is a rare opportunity to invest in a premier nickel PGE sulfide project to deliver high-value nickel sulfate into Asia’s rapidly growing EV industry.

A memorandum of understanding (MOU) between Blackstone Minerals and officials of Vietnam’s Son La Province, signed in April 2022, established a cooperative framework for the development of the Ta Khoa Project, which comprises the Ta Khoa Nickel Project and Ta Khoa Refinery.

“Blackstone’s ambition is to work respectfully and collaboratively with the people of Vietnam to generate significant socio-economic benefits for the communities in which we operate. Vietnam, and the Son La Province, is blessed with mineral potential, excellent infrastructure, loyal people and has all the key ingredients to be at the forefront of the movement towards electrification of transportation,” Scott Williamson, managing director of Blackstone Minerals, said during the MOU signing.

Blackstone Minerals also has interest in other areas with opportunities for development, with a second property located approximately 200 kilometers north of Vancouver in British Columbia. Acquired in October 2017, the Gold Bridge Project, has since completed a maiden exploration program with results indicating opportunities for a world-class cobalt belt — another critical mineral. 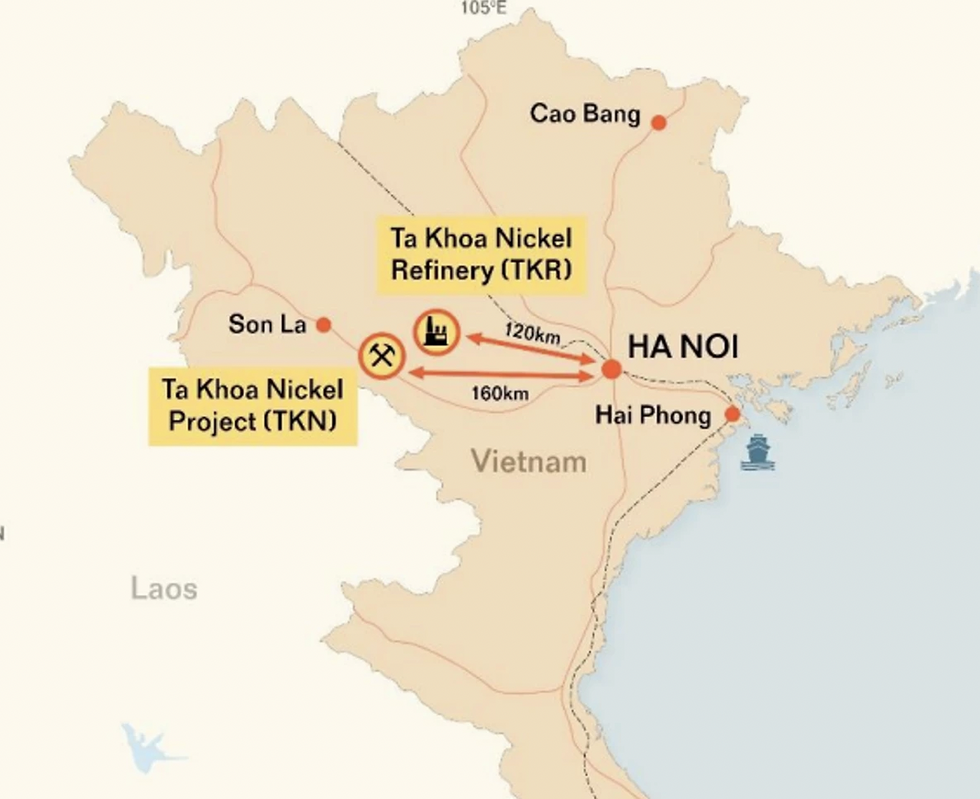 The Ta Khoa Nickel-Copper-PGE Project is located 160 kilometers west of Hanoi in the Son La Province of Vietnam. It includes an existing modern nickel mine built to Australian Standards, which is currently under care and maintenance. The Ban Phuc nickel mine successfully operated as a mechanized underground nickel mine from 2013 to 2016.

Blackstone Minerals completed a scoping study for the development and restart of the Ta Khoa Nickel-Copper-PGE Project. It comprises an open pit mine at the Ban Phuc nickel mine.The disseminated stringer sulphide performs upstream processing and downstream processing to produce a precursor product for the battery market.

This milestone provides an initial platform to build a mine-to-market nickel business over the coming years, with multiple upside opportunities to improve on the scoping study as presented. Blackstone is focused on developing the Ta Khoa Project and a definitive feasibility study for integrated operation is currently underway.

Base physical analysis shows a refinery capacity of 400ktpa with a 10-year operational projection aligning with Ban Phuc’s plans and with the availability of known third- party concentrate feed. The first production is currently targeted in 2024 and is expected to ramp up to steady state operations, currently forecast to be achieved in 2026.

Recent drilling results from portable XRF readings indicated the presence of up to 20 percent nickel at the Ta Khoa project.

The Gold Bridge Project is located approximately 200 kilometers northwest of Vancouver, BC. It comprises 365 square kilometers of 100 percent Blackstone-owned mining claims located in the Cordilleran Terranes of BC. It includes several, high-grade hydrothermal gold, cobalt, nickel and copper deposits and targets the historic Little Gem and Jewel mines. 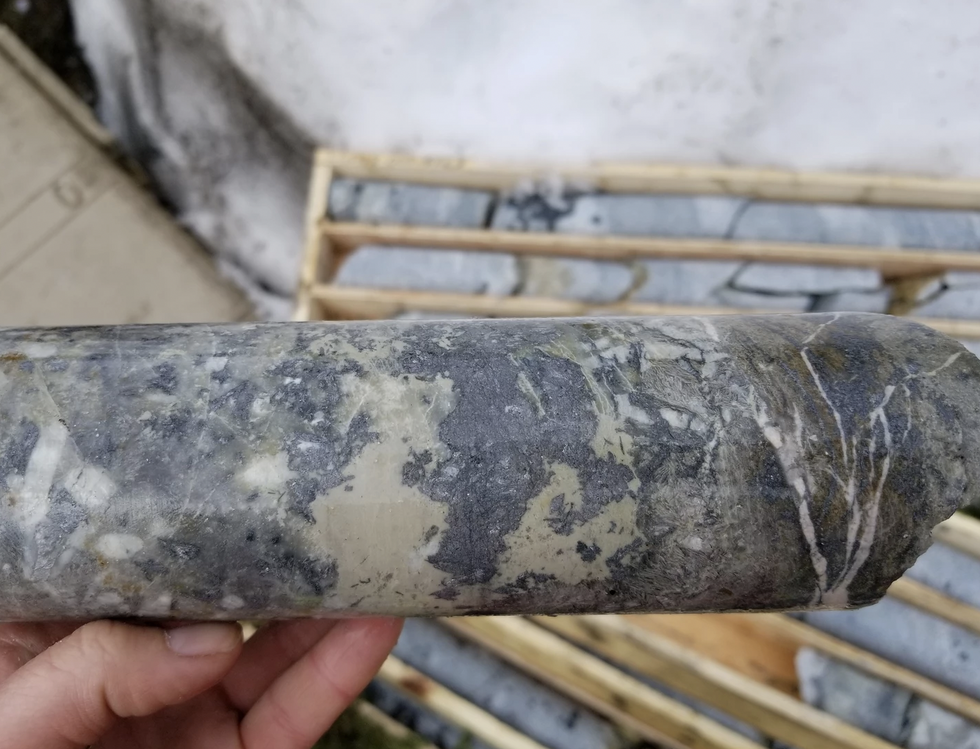 Discovered in the 1930s by prospectors identifying a pink cobalt-bloom on weathered mineralization, it led to the development of three adits. A total of 1,268 meters of drilling was completed from underground and detailed channel sampling was taken from the adits. Results from this work generated some exceptional cobalt and gold assays with average grades of 3.0 percent cobalt and 20g/t gold.

2018 fieldwork saw the discovery of cobalt-gold mineralization at Erebor with concentrations of up to 2.3 percent cobalt, 32 g/t gold, 1.6 percent copper, and 1.1 percent nickel. The large-scale anomaly shows the potential source of high-grade mineralization. The company gathers further area targets from data gathered through the exploration and sampling of stream sediments over the entire 48 km of untried geology for primary cobalt and gold mineralization.

Blackstone completed the 2019 fieldwork with a program of stream sediment sampling, soil sampling, and extensive mapping. It indicates that there is a widespread deep-dispersing sulfide body. Copper, gold, and cobalt anomalies are often distributed inside large structures related to the contact zone between granodiorite and serpentinite.

Blackstone’s geological model for the Jewel Prospect, approximately one kilometer north-northeast of the Little Gem prospect area shows the copper-gold-cobalt potential mining area is located in a favorable location in the same geological area as the underground mines in the primary cobalt-scale area.

The company’s most recent three-hole drilling program results at the Jewel and Western Gem prospects, released in September 2022, have confirmed the presence of significant nickel sulfides in addition to cobalt, gold, silver and copper sulfides.

The Twilight Nickel-Copper Sulfide Project comprises a contiguous 217 square kilometer block of exploration claims located in western Newfoundland and Labrador in Canada, approximately 80 km northeast of Labrador City – Wabrush and 55 km west of Churchill Falls’ hydroelectricity power station and associated infrastructure. Blackstone has an option agreement to acquire up to 100 percent project interest of the claims from prospector Big Land Exploration. The target unit for nickel-copper sulfide mineralisation is the Mesoproterozoic Shabogamo Gabbro intrusive suite. Earlier exploration demonstrated the Shabogamo Gabbro suite is fertile for nickel-copper sulfides. An airborne electromagnetic survey identified several conductors within the Shabogamo Gabbro and reconnaissance exploration drill testing by the BHP-Gallery JV returned intersections of up to 16 m at 0.16 percent nickel and 0.15 percent Copper, including 0.55 m at 0.34 percent nickel and 0.36 percent Copper and 374 ppm cobalt associated with heavily disseminated sulfides in gabbro. The company plans to conduct further high-power electromagnetic testing in this underexplored area.

Scott Williamson is a mining engineer with a commerce degree from the West Australian School of Mines and Curtin University. He has more than 10 years of experience in technical and corporate roles in the mining and finance sectors.

Hamish Halliday is a geologist with more than 20 years of corporate and technical experience. He is the founder of Adamus Resources, a AU$3 million float which became a multi-million-ounce emerging gold producer.

Alison Gaines is a board advisor and Australian non-executive director with strong commercial skills and international experience. She has recently established her own board governance advisory firm after fourteen years with Gerard Daniels, a Perth headquartered international search and board consulting firm where she was recently the global CEO responsible for the Perth, Sydney, London and Houston offices.

Hoirim Jung has more than 10 years of financial management experience, specifically in financing and feasibility studies for new projects. He joined EcoPro in 2016 where his accomplishments include successfully dealing with the initial public offering of subsidiary EcoPro BM

Mitch Thomas is a mining finance professional with more than 15 years experience across various materials (precious, base, specialty chemicals and bulk) and continents (Australia, Africa, Europe, South, and North America). Prior to joining Blackstone, Thomas was CFO of Battery Materials for Rio Tinto with a focus on business development, project execution and financing structures. He is a commerce graduate, a chartered accountant and has an executive MBA from Melbourne Business School.

Jamie Byrde has more than 16 years of experience in corporate consulting, working in public and private company management since starting his career with a top-tier firm. Byrde specializes in financial management, ASX and ASIC compliance, and corporate governance of mineral and resource-focused public companies. Byrde is also the secretary of Venture Minerals.

Dr. Stuart Owen has a bachelor of science degree and a doctoral degree in geology with over 20 years of experience in mineral exploration. He was the senior geologist in the team that discovered the Paulsens Mine and served as an exploration manager at Adamus, which discovered the Southern Ashanti gold deposits. At Venture, Owen discovered the Mt Lindsay tin-tungsten-magnetite deposits.

Andrew Strickland is an experienced study and project manager, and a fellow of the Australian Institute of Mining and Metallurgy. Strickland has a master of business administration degree, with undergraduates in chemical engineering and extractive metallurgy from Curtin and the West Australian School of Mines. Previously, he was senior study manager for GR Engineering Services, where he was responsible for delivering a series of scoping and feasibility studies for Australian and international projects. Strickland has a history of developing mining and metals projects across different commodities and jurisdictions, as well as a broad understanding and experience in minerals processing, project management, and corporate strategy.

Tessa Kutscher is an experienced research and project manager, a Member of the Australian Institute of Mines and Metallurgy, and holds a master of business administration and an undergraduate degree in chemical engineering and metallurgy from Curtin University and Western Australian School of Mines. Prior to joining Blackstone, Kutscher was a senior research manager at GR Engineering, undertaking a range of scope and pre-feasibility studies for both Australian and international projects. Kutscher brings extensive experience with metal and mining projects for a wide range of commodities including base metals, precious metals, industrial minerals, and iron ore. She also has a broad knowledge and experience in developing all aspects of mining projects including geology, mine design optimization and planning, process infrastructure and non-process infrastructure design, approval environment and licensing, marketing, project estimation, project financial analysis and funding.

RWE, Hyphen sign MoU for offtake of 300 000 t/y of green ammonia from Namibia

Business ecosystems in asset finance: Greater than the sum of their parts