“Evaluation of the multiple targets and old mine workings throughout the Burfjord project with diamond drilling has confirmed the prospectivity of the observed IOCG system to host high grade copper within broadly mineralized alteration zones.” Stated Patricio Varas , Executive Chairman and CEO. “The joint Norden/Boliden technical committee team is reviewing the results and is working on plans to follow up the three zones that have emerged as first priority targets.  We are excited to follow up the Gamlegruve, F-gruve and Cedarsgruve prospects with further drill testing with the aim to define economic mineral deposits at Bufjord.”

Only limited exploration has taken place at Burfjord in the modern era before Norden Crown’s recent reconnaissance drill programs. The best historical drill intercept consists of 7 metres @ 3.6% copper 1 and was obtained from the Cedarsgruve (mine) area in the northern portion of the claim block. Previous drilling at the Gamlegruve area by Norden Crown at Burfjord returned compelling results including an intercept of 32 metres averaging 0.56% copper and 0.26 g/t gold (including 3.46 metres of 4.31% copper and 2.22 g/t gold) at shallow depths below a cluster of historical mine workings 2,3 .

Diamond drilling this year has focused on a newly identified, mineralized zone at F-gruve (Figure 1). Three target areas, described below, are now being prioritized for follow-up drilling to test for continuity and grade to define mineral resources.  Results at the Gamlegruve zone and parallel F-gruve zone in the south-east limb of the Bergmark anticline have returned the most interesting copper mineralized and altered zones this year.

Drilling this year has delineated a consistently copper and gold mineralized zone along strike from the F-gruve historical working, from surface to shallow depths (Figure 1).  Only 140 metres of strike length along an 800-metre mapped trend of vein and breccia hosted copper mineralization has been drill tested this year.  The zone remains untested at depth and the Company has particular interest towards the south, where the Caledonian nappe complex covers the gabbro unit which is host to the copper mineralization.  The 2021 magnetic survey conducted by Norden Crown reveals the presence of the gabbro unit, below the Caledonides, extending south for over 1 kilometre.  Norden Crown and Boliden are reviewing the results from drilling at the F-gruve target and are contemplating plans to continue testing the extent, thickness, and grade of the mineralized zone with further drilling.

The mineralization at F-gruve consists of numerous magnetite-jasper-carbonate-hematite-bornite-chalcopyrite veins, surrounded by an envelope of carbonate-magnetite-hematite-quartz-chalcopyrite-bornite vein stockwork and breccias.  The IOCG style of mineralization leaves the company compelled to continue exploration efforts in 2023, where a follow-up program is envisaged for the late winter season.

Mineralization at Cedarsgruve has returned some historical intercepts including a 7-metre intercept with a grade of 3.6% copper.  Norden followed that last year with a 12m intercept with a grade of 1.27% copper in hole BUR-21-011 4 .  Mineralization at Cedarsgruve occurs as disseminations and fine networks of chalcopyrite and pyrite hosted within an intensely albite altered fine sedimentary package, sandwiched between two intrusive gabbro units, which contain vein hosted copper mineralization. The sedimentary package has seen historical mining in numerous places along its surface expression (Cedars gruve, Japan gruve, and Strix workings) (Figure 2) which demonstrates the presence of a mineralized trend at least 1km in length on surface. Norden is considering the use of ground electromagnetics at Cedarsgruve to delineate the presence and form of chalcopyrite networks below surface within the sedimentary package before further drill testing. 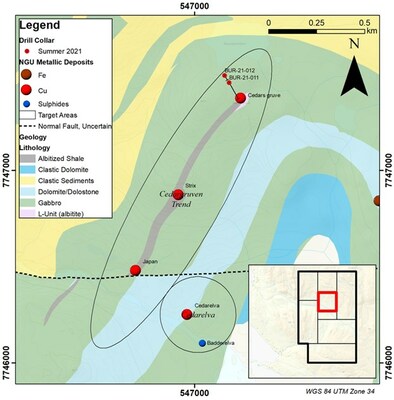 Overview of the Burfjord Project

Burfjord is comprised of six exploration licenses totaling 5,500 hectares. Within the license area, during the nineteenth century, copper mineralization was mined from over 30 historical mines and prospects developed along the flanks of a prominent 4 x 6-kilometre fold (anticline) consisting of interbedded sedimentary and volcanic rocks. Many of the rocks in the anticline are intensely hydrothermally altered and contain sulphide mineralization.

The high-grade copper gold veins at Burfjord, that were historically mined at cut- off grades of 3-5% copper, are surrounded by envelopes of stockwork veins or  disseminations of copper mineralization extending tens to hundreds of metres laterally into the host rocks. Norden Crown believes this mineralization has economic potential and represents an attractive bulk tonnage exploration drilling target. Copper bearing veins in the area are dominated by ferroan carbonate, sodium-rich minerals, and iron-oxide minerals (magnetite and hematite), but also contain the economically important minerals chalcopyrite, bornite and chalcocite in addition to cobalt-rich pyrite as generally coarse-grained (often 0.5 centimetre to multi-centimetre scale) disseminations in the veins.  The sodium-rich (highly saline) styles of alteration and mineralization at Burfjord are also host to elevated levels of rare elements (e.g. Cobalt), which are critical “technology metals” that are important to the emerging green energy and other industries. Discrete zones of cobalt mineralization are also present at Burfjord.

Norden Crown entered into an option agreement (the “Agreement”) with Boliden in respect to Burfjord (see June 10, 2020 News Release).  To earn its 51% interest in the Project, Boliden must fund 100% of the exploration programs by spending US$6 Million over the next four years.  Work on the exploration programs is directed by a joint Norden-Boliden Technical committee.

Norden Crown is a mineral exploration company focused on the discovery of Zinc, Copper, Silver, Gold, and Cobalt deposits in exceptional, historical mining project areas spanning Sweden and Norway .  The Company aims to discover new economic mineral deposits in known mining districts that have seen little or no modern exploration. The Company is led by an experienced management team and technical team, with successful track records in mineral discovery, mining development and financing.

Drill core is logged and prepped for sampling before submittal to ALS in Malå, Sweden where it is cut, bagged, and prepped for analysis. Accredited control samples (blanks and accredited standards) are inserted into the sample intervals regularly. Samples are dried (if necessary), weighed, crushed (70%

Daniel MacNeil , P.Geo, a Qualified Person as defined by National Instrument 43-101, has read and approved all technical and scientific information related to Burfjord contained in   this news release.  Mr. MacNeil is Vice President Exploration for Norden.  Mr. MacNeil has verified the data disclosed in this press release, including the sampling, ‎‎analytical ‎and test data underlying the information.‎  Mr. MacNeil has not verified historical assay information at Burfjord.

Generation’s palladium mine gets environmental permit from Canada

CHART: Uranium’s third bull market since 1968 has further to run