“On the basis of the first two modestly-sized drill campaigns, the Van discovery has quickly achieved an extensive footprint of broad and higher-grade near-surface nickel mineralization, confirming the potential of the Decar Nickel District to host multiple large-scale deposits,” commented Martin Turenne , the Company’s President, and CEO.  “Van remains open for expansion in multiple directions, most favourably to the south, southwest, and west, where the encouraging trend of higher-grade nickel in outcrop and drill results to-date suggest the potential for a significant extension of the already sizeable 2 km 2 mineralized footprint.  While FPX is primarily focused the completion of a Baptiste preliminary feasibility study in the third quarter of 2023, we look forward to future drilling at Van to confirm our hypothesis that Van could ultimately host a significant near-surface nickel resource to complement the neighbouring Baptiste deposit.”

The results described herein are from a ten-hole, 2,504 m drill program completed in 2022 at the Van Target, which is located 6 km north of Baptiste at a similar elevation, and also accessible via active logging roads (see Figure 1).  This drill program was designed to follow up on the inaugural drilling in 2021, stepping out aggressively from the initial discovery area to define the extent of mineralization up to 1 km south and 1.5 km west of the holes drilled in 2021.  The results of the first three holes from the 2022 program (22VAN-010 to 22 VAN-012) were previously reported in the Company’s December 12, 2022 news release.

The nickel mineralization at the Van target, as defined by just 19 holes drilled in 2021 and 2022, is approaching the scale of the Baptiste deposit, which measures 3 km along strike with an approximate width of 1 km.  Mineralization at the Van target remains open along strike to the west, southwest, and south, and at depth, confirming the potential for Van to host a large-scale, standalone nickel deposit.

1 The vertical depth (true width) of all quoted intersections in this news release is interpreted to be approximately 75% of downhole depth.

2 All mineralized core samples are assayed for “Total Nickel” and “Davis Tube Recoverable (” DTR “) Nickel.”  “DTR Nickel” analyses measure only the magnetically recoverable nickel hosted in medium- to coarse-grained awaruite (nickel-iron alloy), whereas the “total nickel” analyses measures both magnetically and non-magnetically recoverable y nickel, the latter hosted in fine-grained awaruite or nickel sulphide minerals. The Davis Tube method is a bench-scale metallurgical test procedure which provides an estimation of magnetically recoverable nickel and is the global industry-standard geometallurgical test for magnetic recovery operations and exploration projects.  See “Sampling and Analytical Method”, below.

3 Due to laboratory delays, Total Nickel assays for 22VAN-019 not available as of the date of this news release.

The nickel mineralization intersected within 22VAN-013 through to 22VAN-019 is characterized by disseminated, fine- to coarse-grained awaruite (nickel-iron alloy) mineralization hosted in serpentinized ophiolitic rocks and is very analogous to the mineralization and geological setting at the Baptiste Deposit.

22VAN-014 was collared 700 m north of 22VAN-013 and drilled to the north-northeast at minus 55 degrees.  The hole encountered bedrock at 2.3 m downhole and thereafter intersected low-grade awaruite mineralization (averaging 0.038% DTR Ni) to a downhole depth of 316.1 m .

22VAN-015 was collared 250 m northwest of 21VAN-006 and drilled to the north-northeast minus 55 degrees.  The hole encountered bedrock at 21.2 m downhole and thereafter intersected 277 m of medium-grade awaruite mineralization (averaging 0.079% DTR Ni), to a downhole depth of 298.2 m .  Mineralization in this drillhole remains open at depth.

22VAN-016 was collared in the same location as 22VAN-015 and drilled to the southwest at minus 55 degrees.  The hole encountered bedrock at 12 m downhole and thereafter intersected 426.9 m of high-grade awaruite mineralization (averaging 0.127% DTR Ni) to a downhole depth of 439.3 m .  Mineralization in this drillhole remains open at depth.

22VAN-018 was collared in the same location as 22VAN-017 and drilled to the south-southwest at minus 55 degrees.  The hole encountered bedrock at 16 m downhole and thereafter intersected 100 m of medium-grade awaruite mineralization (averaging 0.080% DTR Ni) to a downhole depth of 116 m .  Mineralization in this drillhole remains open at depth.

22VAN-019 was collared 800 m south-southeast of 22VAN-013 and drilled to the north-northeast at minus 55 degrees.  The hole encountered bedrock at 8.4 m downhole. This drillhole intersected low-grade awaruite mineralization (averaging 0.035% DTR Ni) and was terminated at 106 m . 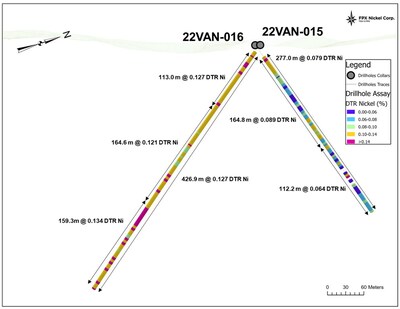 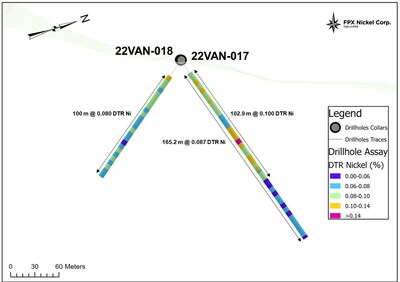 Sampling and Analytical Method
HQ & NQ size drill core were quartered and halved, respectively, on-site using a diamond blade core cutting saw.  Drill core was sampled continuously downhole at nominal 4 m intervals except for post mineralization dikes and non-mineralized rock types as they historically have had zero grade.  Samples were bagged and sealed with tamper proof tags and shipped to Activation Laboratories in Kamloops, British Columbia , for sample preparation. Sample preparation involved crushing the entire sample to 90% passing 2 mm, riffle splitting 250 g, and pulverizing the split to 95% passing 74 microns. Analytical work was completed at Activation Laboratories in Ancaster, Ontario and included lithium metaborate/tetraborate fusion ICP and DTR Ni analysis.  DTR Ni analysis involved processing a 30 g split of the pulp through a Davis tube magnetic separator as a slurry using a constant flow rate of 400 millilitres per minute, a magnetic field strength of 3,500 Gauss, and a tube angle of 45 degrees to produce magnetic and non-magnetic fractions.  The magnetic and non-magnetic fractions were dried, weighed and the magnetic fraction was analyzed by fusion X-Ray Fluorescence (” XRF “) for multiple elements, including nickel, cobalt, iron and chromium.  The DTR Nickel grade was then calculated by multiplying the XRF fusion nickel value by the weight of the magnetic fraction and dividing by the total recorded feed weight.

QA/QC procedures involved the analysis of field and prepared duplicates, DTR replicates, insertion of certified reference materials, and non-certified blanks to assess the accuracy and precision of the Davis tube magnetic separation and XRF analysis that are used to determine the DTR Nickel content.  The Davis Tube method is a bench-scale metallurgical test procedure which provides an estimation of magnetically recoverable nickel and is the global industry-standard geometallurgical test for magnetic recovery for operations and exploration projects.

About the Decar Nickel District

Decar hosts a greenfield discovery of nickel mineralization in the form of a naturally occurring nickel-iron alloy called awaruite (Ni 3 Fe), which is amenable to bulk-tonnage, open-pit mining. Awaruite mineralization has been identified in four target areas within this ophiolite complex, being the Baptiste Deposit, and the B, Sid and Van targets, as confirmed by drilling, petrographic examination, electron probe analyses and outcrop sampling on all four targets.  Since 2010, approximately US $28 million has been spent on the exploration and development of Decar.

Of the four targets in the Decar Nickel District, the Baptiste Deposit, which was initially the most accessible and had the biggest known surface footprint, has been the focus of diamond drilling since 2010, with a total of 99 drillholes and 33,700 m of drilling completed.  The Sid target was tested with two holes in 2010 and the B target had a single hole drilled in 2011; all three holes intersected nickel-iron alloy mineralization over wide intervals with DTR Nickel grades comparable to the Baptiste Deposit.  In 2021, the Company executed an inaugural drilling program at Van which returned results comparable with the strongest results at Baptiste.

FPX Nickel Corp. is focused on the exploration and development of the Decar Nickel District, located in central British Columbia , and other occurrences of the same unique style of naturally occurring nickel-iron alloy mineralization known as awaruite.

On behalf of FPX Nickel Corp.

Certain of the statements made and information contained herein is considered “forward-looking information” within the meaning of applicable Canadian securities laws. These statements address future events and conditions and so involve inherent risks and uncertainties, as disclosed in the Company’s periodic filings with Canadian securities regulators. Actual results could differ from those currently projected. The Company does not assume the obligation to update any forward-looking statement.

Neither the TSX Venture Exchange nor its Regulation Services Provider accepts responsibility for the adequacy or accuracy of this release.